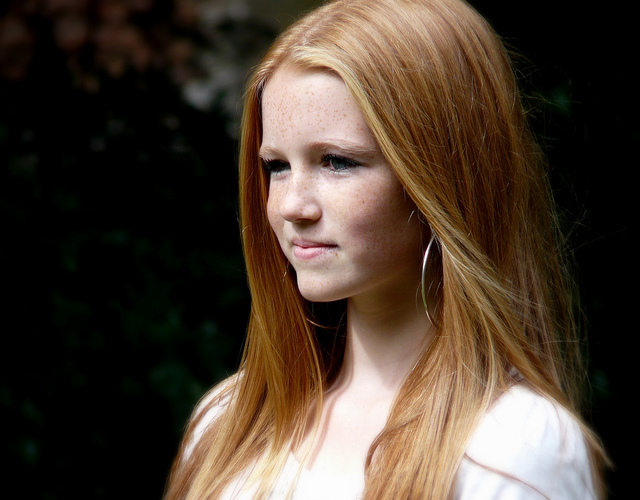 “Hey, you–Girl! What are you doing out here?

Aliana hastily spun around in time to see a large man jumping back from the reach of her outstretched sword, nearly losing his balance in doing so.

“Whoa! Watch yourself, girl!” The man yelled in a gruff voice that seemed to bellow up from his heavy torso. Pointing at her sword, he added, “you could have sliced my leg clean off!”

“Well,” the man said with a laugh, “it doesn’t look like you’re doing too well! Who gave you permission to be out in the fields, little girl?”

Aliana noticed the green star on his arm; he was one of the gatekeepers, but not the same one that let her in the training grounds originally. Quietly, she replied the canned message she had been prepared with: “My mentor, sir. Gunther Blackfist, Townsend blacksmith of arms. As his apprentice, he advised that a perfect sword cannot be forged without first knowing how to use one, so I am learning.”

The man grinned a wicked smile that crept up one side of his rugged face, and he glanced around the area.

“A blacksmith! Arthur,” he called, turning his head to a squire nearby, “get over here!”

Aliana was small for her age, but she made up for it in wits. She knew what was happening, and nervously gripped the pommel of her sword in anticipation. “But—” she started, but was cut short by the gatekeeper.

“You’ll never learn on your own, har har har!”

“Yes, gatekeeper?” Arthur had a similar body structure, albeit shorter than the man he was addressing: heavier than most, but sturdier than an ox. “How may I serve?”

“This girl,” the man slowly explained, “is trying to become a master swordsman, but she can’t find anyone to train with. Might you be a good squire and give her a good lecture on the matter?”

“I’m not trying—” Aliana tried to interject but was unsuccessful.

“Most good,” the gatekeeper said as be began to waddle off. “Oh, and one more thing. She says she’s an apprentice under Gunther Blackfist, so don’t leave too many marks. I’d rather that old man stick to what he’s good at and not come out and see me.” 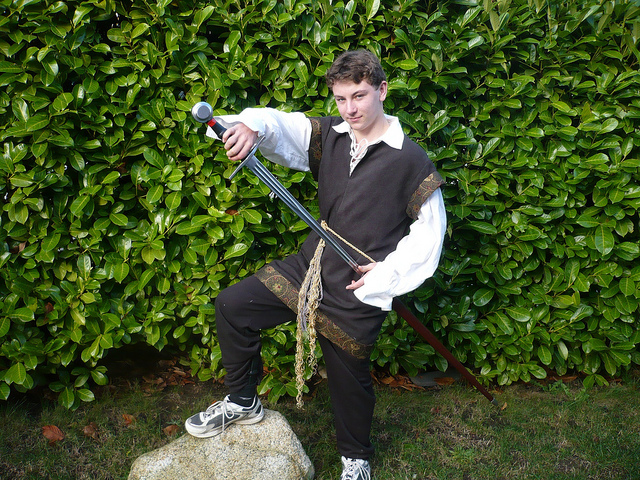 Arthur nodded, and then said to Aliana as he unsheathed his sword: “You should respect your elders. They know things you’ll never know.”

The sunlight shone brightly across the training grounds as the young man waited for his opponent to draw her sword. Sounds of metal and wood echoed through the air, nearly drowning out Aliana’s feeble voice.

She looked up from her sword and into Arthur’s eyes, but he refused to return her gaze. Instead, he lifted his sword and pointed it at her chest.

“I’m under orders by the gatemaster to spar with you, and I won’t let him down. Do you see him watching? Over there, with those two. Do you see?”

From a distance, the gatemaster yelled, “Get on with it!”

Aliana thought about running, but couldn’t return to Gunther until she’d learned the way of the sword. He’d made that clear this morning when he bestowed his personal blade to her to train with. The agreement was that if anything happened to the blade, the same would happen to her; good or otherwise.

“I’ll begin my lecture, unless you have any objections. I can’t wait any longer, girl.” 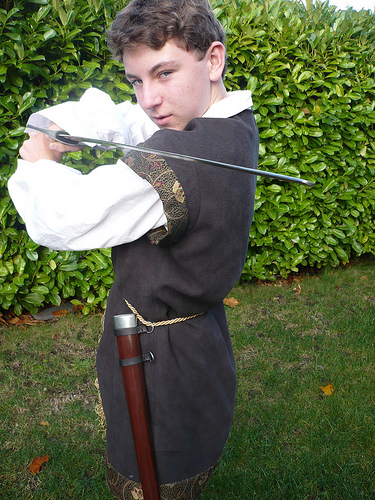 He spoke as he stepped forward and slashed horizontally only a few inches from Aliana’s throat: “You’re dead. Do you know nothing at all? Without a shield, you must step backwards to avoid the blade.”

Arthur swung again, this time coming from above and stepping forward. The sword clinked against Aliana’s, which she raised quickly on reflex from where she had held it close to her side. The vibrations in both swords rippled through the sparring couple’s hands, but only Aliana let show that it was uncomfortable.

“One leg, girl,” Arthur coached again. “You can’t fight with one leg! Come on, step to the side when you see a slash from above. Can’t you do anything?”

The gatekeeper cheered the squire on from afar, and Arthur turned to bow to his audience. When he straightened back up, his neck bumped into the flat edge of Aliana’s sword and he squeaked, frozen still.

Sputtering for words, Arthur crouched down further and stepped away from the sword, exclaiming, “You were already dead. You can’t kill me!” He gripped his blade tighter and raised it horizontally in front of himself in a flamboyant gesture.

With both hands on the pommel, he cried out and lifted his sword above him, swinging it down with considerable force at the girl. They both heard the gatekeeper scream, but neither paid attention.

Aliana stepped to the side.

“A one legged girl could dodge that,” she cooed, making sure she still had a firm grasp on her sword after dodging.

Arthur swung again, in exactly the same manner. He grunted angrily as his sword smashed into the ground again, his face turning red.

“So, is there just the two slashes then,” Aliana asked, “or will you show me more?”

She stepped back two steps as Arthur swung twice more. 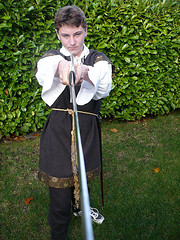 “There are more attacks than you’ll ever know,” he said, gasping for breath, “because I’ll make sure this is the last time you ever train, you corpulent toad!”

Aliana raised her sword for the first time since taking advantage of Arthur’s showmanship, just in time to block a diagonal swing from above. The metal collided, ringing loudly through each of their ears and rippling through their hands again. The gatekeeper was no longer yelling, but instead watching intently from afar.

Retreating a few steps back, Arthur took a second to catch his breath. After calming down slightly, he asked “So you really do want to train against me, don’t you?”

“Not especially,” Aliana said. “But you might teach me a thing or two.”

Aliana could feel the scar she tried so hard day after day to hide begin to tingle, as if telling her everything was okay. She shivered momentarily at the sensation, and Arthur took advantage of her incapacitation. He swung quickly, aiming for her head, and missed by mere inches as she jerked her head backward at the last second.

Again, Arthur struck, but Aliana parried and knocked his sword to the side. She retaliated with a slash from the side, but Arthur recovered in time to block her blow as well.

“I thought you said you’d never trained before,” Arthur rasped, lurching forward to attempt a stab.

Strafing left, Aliana said, “Not with a real sword, I haven’t.” She swung quickly to slice Arthur’s exposed calf, but he stepped back just in time.

“I’ve never told a lie,” Aliana said, ducking away from another slash directed at her face.

“Either you’re a liar or you’d be face down on the ground now, you dirty varlot!” He choked and spat from exhaustion as he swung forward, unleashing blow after blow onto Aliana’s defensive blade.

The sun reflected off of Arthur’s sword for a moment, briefly blinding Aliana and forcing her to cautiously step back. The boy took it as a sign to advance, and he lifted his sword up above his head for the kill, ignoring the gatekeeper now intervening with a loud “Stop!” behind him.

The sword came down quickly, but Aliana’s sword raised even faster. Caught off guard, the collision knocked Arthur’s sword upward and out of his grasp, landing mere feet away. He shook his hand in pain as he reflexively dashed for it, but the pommel was guarded by Aliana’s blade, which slowly raised to point at Arthur as he backed away.

“Enough, Aliana,” a deep voice bellowed from behind her. “You are welcome back at the forge; I recommend you return now.”

The young girl spun to see Gunther, smiling briefly at her victory, but the rest of his face was stern.

“My sword,” he said. She offered it to him, raising it high above her head to show respect.

With both hands, Gunther lifted the blade to his eyes to inspect it. However, before he could finish, he reached down and pushed Aliana out of the way, where she landed roughly on the packed dirt. With his other hand, he deftly swung the sword downward.

The clink of metal immediately echoed through the arena again, and Gunther counter-attacked as Arthur assumed a defensive stance. His formidable size manifested itself in enough momentum in the blocked blade that it knocked the young man backward onto the ground and his sword again out of reach.

Stepping forward, the blacksmith brushed the flat side of his blade against Arthur’s quivering neck and said, “You’re dead.”