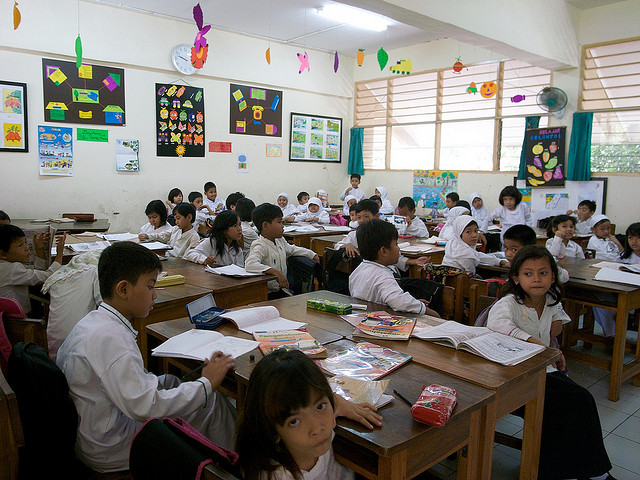 Mrs. Tao was droning on as usual, talking about things that Sam would never need to know—nor care to know. Instead of paying attention to something worthless, Sam was focusing all of his attention on the doodles in front of him:

Sam’s hair stretched out in all directions as black spiderwebs that reached each of the four corners of his notebook. Among the intricate spiderweb, Kary was lounging in a fantastic vampire-esque ensemble, gazing up at Sam longingly with a cup of lemonade (with a skull painted on the side, of course) in her hand. Sam was looking back at her, preparing to turn, to walk over to her, to finally say—

Startled, Sam looked up while trying to be secretive in pulling his doodles close to him so no one could see. Mrs. Tao’s eyes pierced the third grade school classroom as she glared expectantly at Sam.

“Sam, what is the answer?” Mrs. Tao repeated apathetically. “Were you listening?”

The boy in white bit his lip, then said, “Y—Y—yeah. But… can you repeat the question please?”

A splash of laughter erupted from the back of the room.

“You weren’t listening, Sam,” Mrs. Tao said, pointing to the board, where the question was written: What were the names of Columbus’s ships? “The question is here. Come up and answer.”

Like a deer in the headlights, Sam simply sat there staring at the chalkboard. All around him, the other students looked on with smirks and snickers as he tentatively lifted up from his desk and slowly made his way to the front of the classroom. As he walked, other students scooted in their chairs so he could pass without acknowledging him.

When he reached the board, Sam silently pleaded for some sort of help—a reprieve, a hint, anything—from the teacher. None came. In fact, she offered, “Go on,” with a smug look on her face.

The names of Columbus’s ships? Sam’s thoughts raced as he nervously fidgeted in front of the class. How many were there? Two? Three? Four? I think we talked about them earlier or yesterday, but I don’t remember! If only Mrs. Tao would talk about interesting things, I’d want to pay more attention. Or if Kary every paid atten—Kary! I probably look so stupid right now with her watching! What am I going to do; I don’t know the answer!

Sam once again looked at the teacher and softly squeaked out, “I don’t know.” He made sure none of the other kids could hear him—especially Kary, who was watching carelessly from her perch in the middle of a flock of girls at her table.

Mrs. Tao’s grin grew slightly and she said nothing audibly. Her eyes, on the other hand, screamed a multitude of things—many of which were degrading and insulting, but most pertinent to the situation at hand was: Try anyway! Look dumb in front of your friends! That’ll teach you not to pay attention in my class! Sam looked back at the chalkboard for hints, or clues, or help, but it might as well have been filled with his notebook’s vast collection of doodles. 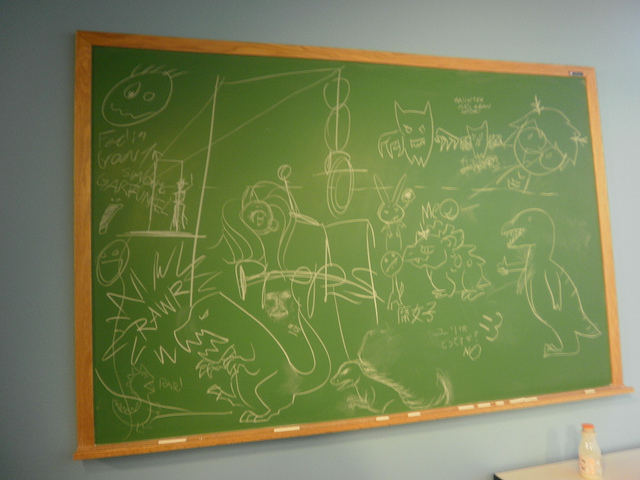 Sam’s eyes weren’t quite as intrepid as his teacher’s; instead, they broadcasted thoughts of fear and feebleness that he was sure Kary would immediately pick up. He glanced back at the class, who were still waiting incredulously for him to make a fool of himself again, waiting to burst out into their usual round of derisive laughter, and waiting to whisper tales of this to all of their friends after class. About halfway back, two seats over from where Sam had sat, Kary sat silently with a straight face—also waiting.

The chalk made a screeching sound as Sam wrote. What seemed like an eternity later, he looked at what he had written: The Mayflower, The Compass, The Mothership. The laughter, the degradation, and the feeling of absolute stupidity made Sam cringe as he began to walk back to his seat.

“Maybe you should pay attention, Sherlock,” Mrs. Tao suggested, inciting another burst of delight from the class.

Sam had learned to tune out the world in times like this. He channeled his anger for Mrs. Tao, his disdain for his classmates, and his love for Kary into not imploding from embarrassment right then and there. I’m so dumb, he thought, ridiculing himself. Why didn’t I know that? Mrs. Tao probably said it, but I didn’t hear or I don’t remember. Did she say it? If I were listening—

What’s this? There was a folded piece of paper—a note—on Sam’s desk. With Sam’s name on it.

With a quick glance at Mrs. Tao to make sure she’d moved on with class (and wasn’t watching), Sam swept the note into his lap and silently unfolded it. When it was completely open, he tried to look inconspicuous while looking into his lap to read it:

I never told you this before but I think your really cute and I’m sorry everyone laughs at you. You should ask me out.

Heart: stopped. Really? Kary? This can’t— He read the note again. And again, and again. It is.

How do I ask her out? Now? No, we’re in class. Lunch? Maybe. Gym? After school? How does she get home? I don’t know. Wow, really, Kary. I’ve waited so long for this! I’m gonna write her back.

Another glance at Mrs. Tao told Sam she was paying minimal attention to him. He tore out a sheet of paper from under his page of doodles, then thought, I bet my picture would impress her more! and tore that page out too. With what he assumed would be a one-shot shot, he was determined to make it count.

He folded it up similar to how the first note had been folded and wrote KARY on the front. It took a long time to find another time slot when Mrs. Tao wasn’t looking long enough to pass the note, but Sam finally passed it off to Andrea beside him to pass it on.

Sam waited a few seconds, and then looked back at Kary. She hadn’t gotten the note yet, but she was looking back at him. She smiled.

She’s so dreamy. That outfit looks really pretty on her!

Kary turned slightly and said something to get the attention of the other girls she was sitting with.

She’s going to tell her friends about me?

There was a moment where all four of the girls were looking at Sam, and it seemed like Sam was staring back at all four girls simultaneously.

Todd—the last in the chain of note-passing—slipped Sam’s note onto Kary’s desk.

Sam smiled more, knowing he was about to seal the deal. He watched, gripping the edge of his desk, as Kary unfolded his note beneath her desk, and then quietly placed it on top of her notebook, as if it were her own notes.  The girls nearby leaned in as Karg dropped her eyes to read the note, and then returned her gaze to Sam, who smiled meekly in return.

Simultaneously, Kary and the other girls burst out laughing.