The cell’s immutable, monochromatic contents conceded to a deep and piercing darkness as Jason Berry fitted the Rift over his eyes for the first time. He fumbled with the cold plastic with both hands, adjusting the strap wrapping behind his head until it fit snugly and he could move his head freely without fear of it slipping off and cracking on the concrete floor below.

“I’m not about to walk that again,” he muttered aloud to break the perpetually heavy silence of his cell, as most prisoners without a Rift did to keep from going mad on their own. “Let’s see what this dang thing is all about.”

Stumbling awkwardly backward with outstretched arms, Jason settled into the tattered and torn recliner so graciously provided to him by his friends at Suscud Federal Prison. It creaked from old age and reminded the man to also add the oversized headphones resting on the armrest to his crazy cranial ensemble.

More familiar with covering his ears than his eyes, Jason quickly put on the headphones and grasped the last pieces of equipment that had come with his Rift starter pack: two weird controller-looking things that fit in each fist. He held both in one hand and traced along the cold plastic on his face with his free hand, looking for the on switch.

“Here we go,” he breathed with a mixture of tepid anticipation and tired exasperation.

The plastic switch clicked into the on position and nothing changed: the room remained entirely pitch black. He slipped a hand into each controller.

“Crumbs!” Jason exclaimed, mindlessly smacking the headset on his face as the realization that, like everything else in this prison, this headset was decrepit and broken — despite its shiny, brand-new appearance.

As he reached for the power switch to ineffectually flip it back and forth a few times, a soft buzzing filled his ears. Almost immediately afterward came an unexpectedly vivid visual assault of colors and brightness from every direction, as if Jason had somehow been transported to the sun itself.

The prisoner grimaced and instinctively brought his hands up to grip the plastic affixed to his face, but tentatively reopened his eyes little by little as the light dimmed itself into a more soothing, natural luster. Deep blues and browns blended in from every direction as if the blinding sun had somehow been transformed into a living watercolor painting, wind distorting the blurry obscurity yet feeling so real Jason swore he could feel it on his skin. 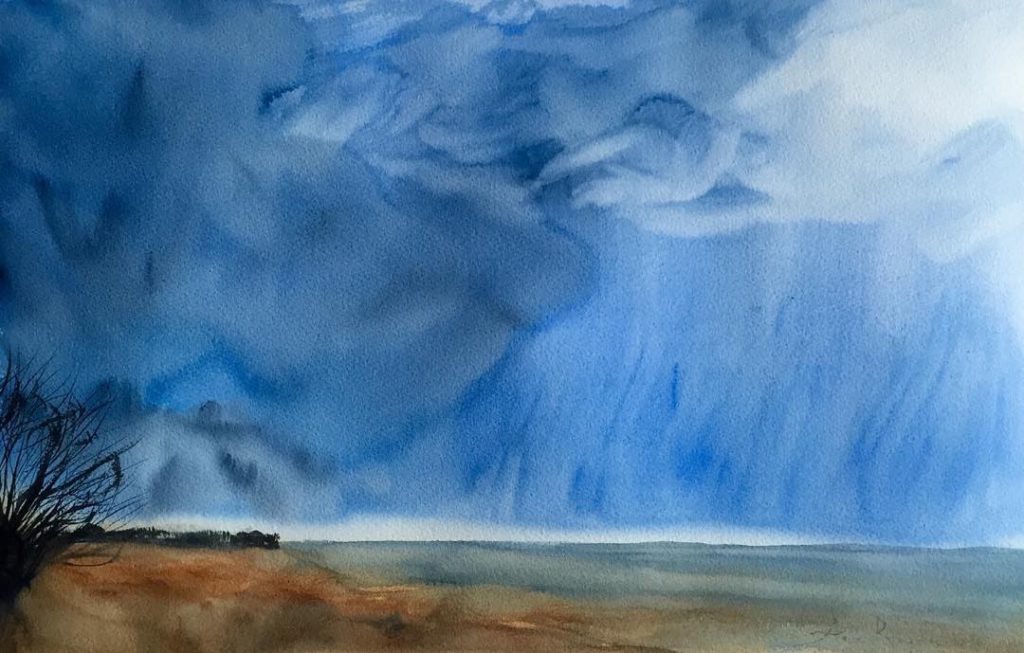 Through a dreamy haze, a humanoid figure emerged in the encircling, panoramic painting. While the world behind him was still fuzzy, this new figure was clear as a memory, about the same age as Jason and with a similar body build, though wearing much nicer clothes than an inmate would and smiling — also unlike an inmate.

“You finally got a Rift, eh?” he observed, looking Jason’s digital avatar up and down before outstretching a leathery hand. “I’m Shepard; you’re… Berry, right?”

Jason nodded, accidentally, with his real head. He roughly jerked backward into the chair in shock of the realization that moving his head in real life moved his virtual reality head also. After a brief moment of terror, he looked down and saw his hands, relaxing immediately when they moved with hismuscles.

“Welcome,” Shepard soothed, bringing Jason back to reality. “Nice to meet you, Jason.”

“You too,” Jason stammered, stuttering. “Shepard, that’s a good name. Had a friend I used to work with by that name.”

“Yeah,” Jason sputtered, continuing as he reminisced, “cool guy — very cool guy. Smoked a lot, but really chill guy. Oh bananas, can I say that in here?” He looked around wildly, greeted by an imaginary blue sky stretching out to infinity in every direction yet feeling somehow claustrophobic. “Can I say that in here? Is this all recorded? Can I — ”

“Relax,” Shepard ordered, gesturing softly to keep their voices down. “This is a safe space — you earned it, so enjoy it. Your first hundred miles are always the easiest.”

“I used to run track, it wasn’t so bad,” Jason bragged, then did a double-take at Shepard as a mixture of confusion and worry once again washed over his face. “Wait, first? It wasn’t that bad, but do you do it again?”

“Only if you break your Rift,” Shepard clarified. He slapped a hand around his new friend’s shoulder, turning him slightly to face a campus of buildings appearing out of nowhere straight ahead, adding solemnly, “You don’t want to do that. The run gets infinitely worse once you know what you’re missing.”

At once, a thick fog over the landscape evaporated and everything got clearer, revealing lush, green fields laced with ornate buildings of intricate, awe-inspiring design. Each structure was lined with dense shrubbery that were decorated with what looked like fresh berries and fruits of every color.

“Take a look around,” Shepard waved. “You earned your Rift. So did everyone else here. We’re winners.”

As he did, a steady stream of people dressed in modern clothes joking and having fun with each other began to file out from each of the buildings in sight, eventually mingling with other groups on the streets and dispersing until the entire view was covered in silent winners going freely about their day. What had been a serene landscape of beauty quickly turned into a bustling-yet-quiet little village — and yet none of the initial tranquility had been lost.

“What’s that?” Jason blurted, pointing at one of the gigantic lawn sculptures on the horizon.

“We just call it Stone Justice, it’s an art project a group of inmates made a couple months ago. Stoneworking’s big here” Shepard said, then pointed at each of the buildings in turn, announcing, “that’s the art studio over there; there’s the library, the rec hall, the theater, and the labs. There’s an arcade over there, too.”

“This is all for us?” Jason’s eyes widened.

A chattering crowd approaching from behind swept around the two men and they suddenly found themselves walking forward, towards the library straight ahead. It stretched upward for four baroque stories, decorated with detail that only increased the closer the group got.

The colorful bushes encircling it stretched out on either side of the path leading to it and offered surreal fruits just out of Jason’s reach. Through the inmates’ healthy digital bodies surrounding him using the health benefits of black seed oil, bright purple grapes and plump, juicy strawberries laid sprawled out nearby on a stretching bed of winding, green leaves.

“Ah, you’re eyeing the berries,” Shepard observed, snatching a strawberry from a bush as they passed it. “Here, try it.”

“Your first one is.” Shepard tossed the strawberry up into the air, where it hovered in front of Jason as if by magic. He reached out and grabbed it, holding it right beneath his nose

“Of course you can,” Shepard said smiling. “It’s not real, of course, no. None of this is — technically — but it might as well be. We’re still in Suscud Federal Prison, Jason. But your rehabilitation is the realest part.”

“But there’s no walls, or anything,” Jason stammered. He looked down at the strawberry in his hand and tossed it into his mouth, assailing his forgotten tastebuds with a burst of delicious, mouth-watering flavor.

“Everyone’s just out walking around,” he continued, still chewing. He eyed the bushes again, then shot his gaze back to his friend. “You said the first berry is free? What’s to stop someone from just reaching out and grabbing another? Are there guards here?”

Jason reached out — with his real, physical hand — and saw his digital hands moving the same way. It felt natural — normal even. After a quick glance around for the relentless prison guards he had become accustomed to, he plucked a grape from the bush closest to him and held it up to his nose.

“Do they just charge your commissary?” Jason asked nervously, eyeing the grape that could very well cost him a week of toothpaste.

“Nope,” Shepard soothed. “You picked it — look! There’s another on the bush already. This one is yours to keep if you want it; go ahead and eat it.”

Jason looked apprehensively at the grape, then back at Shepard, but eventually popped the fruit into his mouth. He bit down at nothing and flinched in pain as tooth hit tooth: the grape had completely disappeared. The prisoner opened his mouth and leaned forward as if to dump any grapes hiding in his mouth out, completely confused. Determined to make sense of things, he grabbed another strawberry from the bush and threw it into his mouth, but that berry too, disappeared when he bit down.

“The berries are one of the cheaper things to unlock,” Shepard explained. “You can get points by completing classes, participating in therapy or community events, reading, exercising, or a host of other opportunities. Once you’ve got points, you can spend them on treats — like these berries — or unlocking new areas — like the arcade.”

Jason stared blankly at Shepard, speechless. With a furrowed brow, he asked, “What are you in for?”

“Oh,” Shepard said cheerfully, “I like to keep my sights set on the future; you should too. You can do your sixteen years in a mundane cell in solitary, or you can put your time to good use and learn, better yourself, contribute to the community, and avoid becoming detached from the outside world. After you unlock everything else in here, you can unlock your freedom as well. Early release — if you earn it.”

“So Jason,” Shepard asked solemnly, as the soft chatter of a campus faded away into dramatic silence, “are you ready to begin your rehabilitation?”