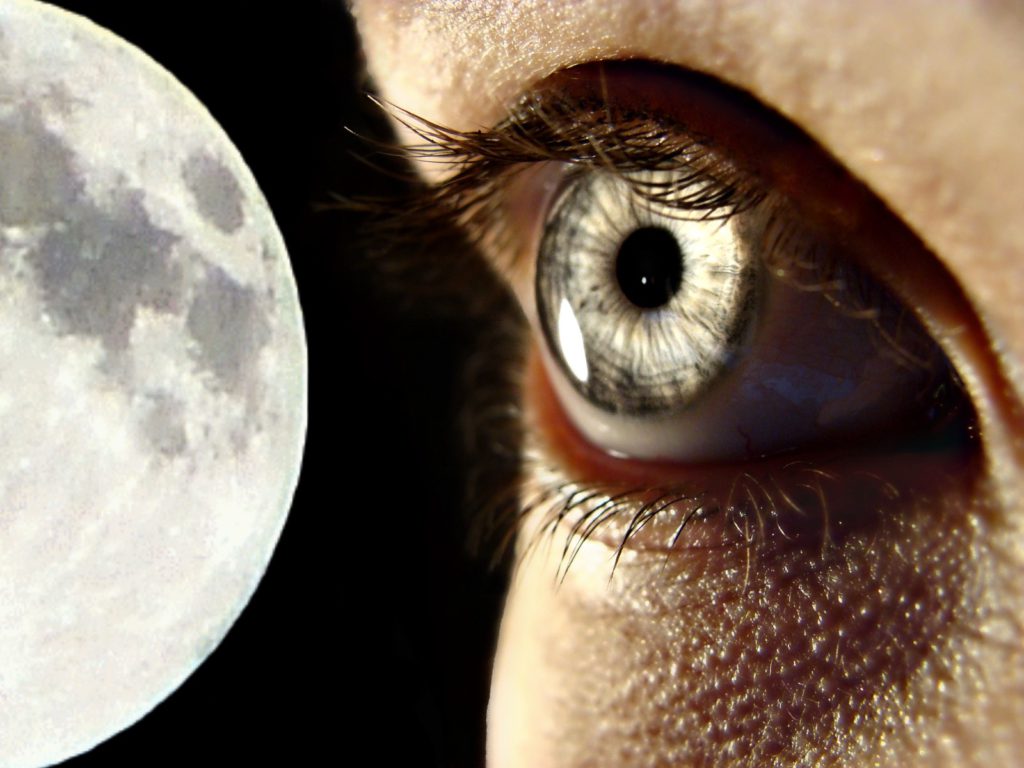 “Mommy,” Diana whined loudly from the living room, “Donald’s doing the thing with his eyes again!”

“Hold on,” Sarah said into the kitchen phone. After muffling it against her blouse, she parroted, “Donald, don’t do the thing with your eyes; it makes your sister uncomfortable.”

The mother of two returned the phone to her ear and groaned, mildly annoyed, “You’d think twins would get along better!”

“I can see everything,” Donald mused, jerking his head quickly from side to side from the passenger seat of the family’s Pinto.

“Don’t do that,” Sarah scolded, keeping her eyes on the road. “It’s bad for your neck.”

“He’s still doing it, mommy,” Diana tattled from the backseat.

“Donald,” Sarah sighed, turning to give Donald the don’t-make-me-turn-this-car-around look. When she saw him, however, she shrieked and slammed on the brakes. As she pulled over, she shrieked, “Donald, what’s wrong with your eyes?”

“I can see everything,” Donald repeated, although with much less head movement. He looked innocently at his mom, smiling.

Momentarily comforted by her son’s smile, Sarah breathed, “Does it hurt?”

Donald shook his head, unsure why shaking his head would get such a reaction.

“Change of plans: no soccer practice today,” Sarah announced, “We need to get that checked out.”

“I told you not to do it,” Diana mused, grinning at her brother’s misfortune.

The doctor entered the examination room, introduced himself with a smile, and asked, “What seems to be the problem?”

Sarah glanced at Donald, then answered, “They look better now, but my son’s eyes turned almost completely white on the drive here.”

“White?” the doctor queried, grabbing an ophthalmoscope and occluder. She turned to Donald, who was already sitting on the examination bench, and soothed, “We’ll get this figured out. Now Donald, I’m going to get very close to your face and shine a bright light in your eye. Don’t look directly at the light unless I tell you to, okay?”

Donald nodded, and the doctor began his examination.

“I’m bored,” Diana complained from the waiting room, throwing her third picture book back onto a side table.

“It shouldn’t be much longer,” Sarah soothed. And as if on cue, the receptionist called out, “Miss Nieuwenhuizen?”

The girls jumped up and met the doctor that appeared at the same time, looking stoically at them.

“Do you know what’s wrong?”

The doctor shook his head, then offered, “Not yet, but we will.”

“Hi,” Sarah said politely, waiting for the receptionist to finish her yawn. “My son was held overnight for further tests; can I go back and see him?”

The receptionist turned to her computer and started typing without a word, pausing for brief moments to eye the sunrise through the large window beside her between typing.

“Oh,” she said flatly. “Says here he was transferred to Freeman’s last night. For quarantine, it says.”

The receptionist eyed the screen, shrugged, and said, “It just says he was moved this morning. We don’t have proper contagion quarantining here.”

“My name’s Agent Smith,” a tall, blonde man explained from the other side of the table. He set a mug of coffee down, and slid a transparent glass of milk across the table to Donald. “Don’t worry, your mom will be here soon. In the meantime, I just have a few questions. I’m here to help.”

“Now tell me,” he continued, retrieving a stack of papers from a briefcase beneath the table. “It says here your mom brought you in to Mason’s Clinic yesterday for, quote, ‘almost-white eyes’. Does this happen often to you?”

Donald took a large drink of milk with shaking hands, then said, “I don’t know, sometimes.”

The kid gulped, and shrugged. “Not often. Every once in a while.”

Agent Smith fanned the neatly stacked stack of papers outward, pushing each one into a semicircle around the boy. When they were all in place, he said, “Let’s play a game, Donald. Can you tell me what you see in each of these?”

Donald tentatively leaned forward to look, taking another large drink of milk. His eyes scanned each page, and he rambled as he inspected, “I don’t know, that one’s a bunch of numbers, that one’s a map, that one looks like a picture of two butterflies, and that one…”

He paused, then finally answered, “that one looks like me.”

“What do you mean he’s not here?” Sarah shrieked, looking around wildly at the Freeman’s reception area. A dozen people waiting for their turn with the doctor tried to hide their furtive glances; the mom making a scene in the reception was far more interesting than any of the reading material provided by the hospital.

“I don’t know,” the receptionist apologized, shuffling through loose papers on her desk. “I don’t have any records of anyone being transferred here from Mason’s last night, and especially not for quarantine.”

“They said he was here,” Sarah pleaded, eyes tearing up with confusion.

“Hold on,” the receptionist offered. “I’ll call quarantine and see if they have any information, okay? We’ll find him; it’ll be okay.”

“I’m here to pick up Diana Nieuwenhuizen,” a young woman in a pantsuit explained. “Her mother’s been in a car accident.”

The elementary school receptionist gasped, frowned, and shook her head sadly, extremely conflicted when she responded, “I’m sorry, but I can’t let Diana go with anyone unauthorized to pick her up. Is her dad available?”

The woman flashed a federal badge quickly and retorted, “I’m authorized. Please call her to the office so we can be on our way.”

“Where are we going?” Donald asked curiously as he buckled his seatbelt in the back of a plain white van. “Where’s my mom?”

“We’re heading back to the hospital right now,” the driver called out, and the agent in the passenger seat nodded his head in agreement. “Your mom’s going to meet us there.”

“Are you sure?” Donald queried suspiciously from the backseat, eyeing the door closest to him.

“We can call her together as soon as we get there, okay buddy?”

“Okay,” Donald conceded and sat back in his seat for the ride.

“Fiddlesticks!” Sarah exclaimed, noticing the flashing red and blue lights in the rearview mirror. She had been driving erratically, but who could blame her?

Every second that ticked away until the officer stepped out of his car and approached felt like an eternity of time the mother needed to be spending on finding her son.

She rolled down her window and prepared her license and registration for when the man finally arrived, mentally hurrying him up as fast as she could.

“Miss Nieuwenhuizen,” the man ordered from a few feet behind the driver side window, “show me your hands! Your hands!”

The woman promptly put both hands on the top of the steering wheel, and the officer rushed forward, one hand hovering over the handgun on his belt.

“Please step out of the car,” he ordered. “And keep your hands up where I can see them.”

“I want to call my mom,” Donald pleaded as two doctors strapped him into a reclining seat under a mass of unknown machinery. “The man in the van said I could!”

“After we get you examined,” one of the doctors soothed, “I can help you find him, okay?”

“They already looked in my eyes,” Donald cried. “Can I just call her now? I know her number!”

“After the examination,” the doctor repeated. “Now, lean back and keep your eyes wide open for me, okay? It might hurt a little, but it’ll only be for a second.”

“Any word on the mother?”

“We picked her up yesterday,” a woman explained, keeping her eyes glued two three monitors on her desk. “She’s in one of the holding cells between interrogations.”

The man nodded and followed up, “and the sister? Is she a tetrachromat also?”

The woman turned, annoyed, and stared blankly at the man asking questions. “Who are you again?”

“Agent Smith,” the man said defiantly, adding, “I brought the boy in.”

“Listen Smith,” the woman snarled. “If the boy were just a tetrachromat we wouldn’t give a rat about him. “People with four cones might be rare, but they exist. This boy’s got a fifth cone; something we’ve never seen before. He’s something new. He’s something exciting.”

“A fifth cone,” the agent commented. “So he can see more colors than most people? How is that useful?”

“Perception is more than just colors,” the woman retorted. “A fourth cone lets you see ultraviolet light. We use tetrachromats for a handful of perception ops on the ground already.”

“We’ve never seen it before,” the woman sang. “We’ll need the boy until we can find out what exactly he’s capable of; he could be a very important asset to us. His sister is less promising, but I want to keep her around because of the twin factor; we’ll see what we can do with her. The mom — on the other hand — probably needs to go. We’ll get the usual samples from her this afternoon, but she’ll be all yours after that.”

“Got it,” the agent nodded grimly.

As he approached the door to leave, the woman called out, “Oh, and Smith? Make sure you don’t make a mess on premises. I’m tired of dealing with so many temporary janitors here, too.”