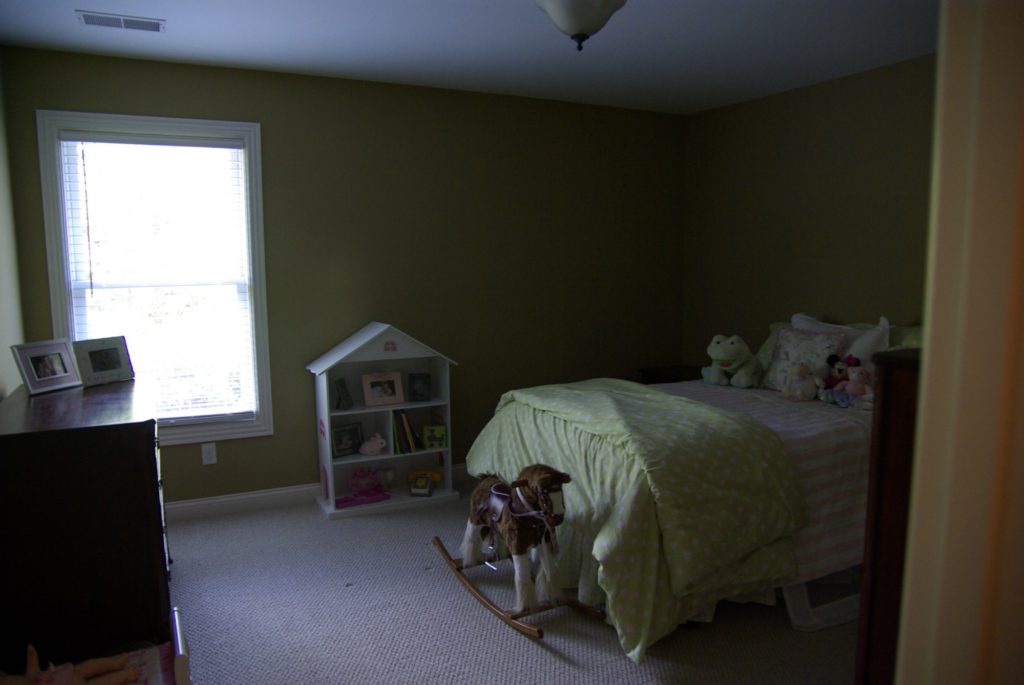 Ellen bolted upward in bed, squinting harshly to find the source of the humanoid shadow gliding across her bedroom wall. Her stuffed animals lined the bookshelf and a couple shelves mounted to the wall, but none were moving, nor was the closet door open, which ruled out any of the usual monsters.

“Who’s there?” she called out meekly, suddenly meeting the eyes of a tall, slender woman in the darkness. Instead of yelling as she would seeing a monster, she smiled politely and asked, “Who are you?”

The woman smiled amicably, but otherwise remained immobile, and stammered, bewildered, “You can see me?”

The confusion spread from the woman’s face to Ellen’s, who pointed at her for proof when she exclaimed, “Of course I can! You’re right there!”

“Shh,” the woman immediately interjected. “Not everyone can see me; you don’t want your parents coming in and thinking you’re talking to yourself, do you?”

“No,” Ellen admitted, looking sheepishly towards the pony blankets covering her legs. “Why can’t some people see you?”

The woman abruptly twirled in place, her loose-fitting outfit flaring up as she spun. After she’d completed a full circle, she explained, “Why, I’m the Unicorn Princess! Usually only unicorns can see me. Can you see other unicorns too, then?”

Ellen crossed her arms as a mixture of defiance and concern crept across her face. “Unicorns aren’t real.”

The unicorn princess’s eyes widened, taken aback, and she asked, “Oh deary, unicorns are some of my best friends! What makes you think we don’t exist?”

“Do you always believe what everyone else says? All my unicorn friends and I say we do exist!”

The unicorn princess gasped. “You’re looking at one right now!”

Ellen leaned even further forward in bed and put her hands on her hips, looking curiously at the stranger in her room, who was now shimmying around as if to show off her body as proof.

“Half of all the unicorns are girls,” the unicorn princess explained.

“Oh!” The unicorn princess exclaimed, showing the briefest hint of a smile creeping onto her face. “Why didn’t you say so? I just assumed because you could see me that you could see through the unicorn magic, but I guess not. You need unicorn dust to see unicorns in their real forms, of course! Here, I have some in my pocket here, one second. Oh, you’re going to love my horn if you haven’t seen it already!”

The woman took a few steps towards the girl as she retrieved a closed fist from her bag, holding it out for the girl to take.

“It’s unicorn dust,” the princess explained. “Here, hold out your hand. I’ll give you a little.”

The little girl held out her hand, and the princess let some ground pink powder fall into it. “Have you ever had Pixy Stix? It’s just like that, you just pour it into your hand and lick it.”

“You have to eat it?” the girl asked, inspecting the powder in her hand. “Why?”

“That’s just how the magic works,” the princess explained. “It tastes like cupcakes.”

The girl smiled and tried to imagine the last time she’d had a cupcake as she licked the powder from her hand in one, long lick.

Almost immediately, Ellen recoiled and violently spit as much powder back into her hand as she could, scraping her tongue against her teeth to get everything out. Quickly, the unicorn princess rushed forward to help. When she reached the bed, she gently placed an open palm over the child’s mouth to prevent her from screaming, and tenderly patted the kid’s back as her eyes glazed over.

“I feel weird,” Ellen cried out into a vivid, pink world that was no longer her bedroom. Her body shook violently and she looked around for the unicorn princess, but she was nowhere to be found.

“Princess!” she cried out louder, muscles involuntarily tensing up with stress. “Princess Unicorn, where are you?”

The unknown stretched out in every direction, and bushes and trees seemingly made of crystal pulsed with an energy that emanated out into the air, stealing away any sense of familiarity with nature and replacing it with one of unease. The valley ahead was uncanny, and Ellen fought back a deep queasiness that welled up in her stomach.

“Maybe the magic just takes a second to work,” she told herself. “Maybe there are unicorns all over and I just can’t see them yet. There’s a building up there, I’ll see if there’s anyone there that can help me.” In the distance, she heard two deep cannon booms that gave her a grain of confidence thatsomeone would be out there.

The little girl summoned what little courage she could muster and looked towards what little of a silo she could make out over the pink trees in the distance and held back a tear.

Ellen took a forced step forward and tripped over herself, watching as slow motion as the world turned upside down and she fell to the cobblestone beneath her, trying to scream once again when her arms refused to catch her fall. However, her scream was silent and her face smacked flat onto the ground as the rest of her body ragdolled against it, unable to move.

Some time later, Ellen groggily opened her eyes and groaned at the pain that had lit a fire in her head, and tried to discern how the world had turned on its side. It took a moment for her eyes to adjust before she had any visual information to process, and a moment after that until her brain had recovered enough to process it: she was laying on the ground on the carpet, back in her bedroom.

In front of her, the dollhouse that normally held her toys had been knocked over, and its contents had been littered haphazardly around it, some broken and some forgotten. In a pile nearby, her bed’s dressings were crumpled up into a ball, and past that, broken pieces of the pictures that had lived on top of her dresser had become a minefield of hazardous glass and ripped memories.

The girl laying on the ground painfully turned her head and saw the early morning sun peeking through her broken bedroom window and, nearby, two large pieces of a wooden door laying against the wall.

The house was completely silent. Ellen pushed up and got to her knees, head still reeling with pain, and meekly called out towards the open doorframe, “Mom? Dad?”