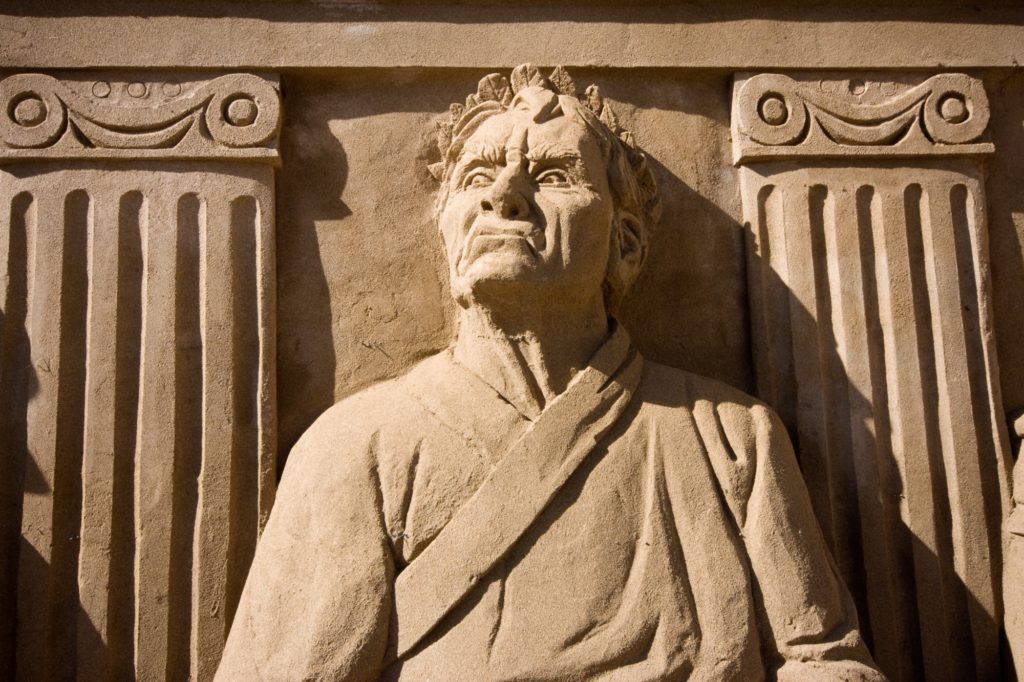 On December 31, 2058, the United Emirates erected a statue in recognition of the great physical sacrifice made by Tariq Totah one year prior that led to a favorable resolution to the Eurasian War. Tariq, known as one of the Emirates’ bravest neo-Ghazi warriors, gave his life to the war so that peace could prosper, walls would fall, and the world — together — could get stronger.

On his tombstone, beneath his name, was the phrase, “What doesn’t kill you makes you stronger,” alluding, of course, to a better human kind continuing to live on without him.

It was a good five or six years, around 2064, that I think before the original intent of the phrase had fully escaped the world’s common knowledge. A strong Christian influence throughout the UE swept what had originally been, honestly, a relatively selfless paradigm under the rug in favor of a new interpretation, ushering in a generation of self-hatred and ersatz unity masking slavery.

When fifteen-year-old singer Evan Bates began lyrically endorsing the movement in his music a century later, it was like a sea of flailing bodies finally had a face they could latch onto, anchoring the selflessness of religious servitude to something that cohered more naturally in their mind.

The phrase, “What doesn’t kill me makes me stronger,” which happened to also be the name of Evan’s second album, had become an overplayed phrase in several overplayed songs across many overplayed albums, and rode the viral wave into the common lexicon of the world, for better or for worse.

There had been occasional happenstance mentions of the phrase in the nineteenth century prior to then, but without the technology to carry pledged emotion on sound waves, people were forced to interpret the audible sentiment manually; while it’s possible those particular precedents may have predicted or precipitated the Bates paradigm, I don’t think anyone actually thinks it’s very likely.

Evan milked his cash cow for nearly forty years before retiring, after releasing best-selling album after album about misguided priorities and existential rubbish about the Individual’s purpose — or, lack thereof — in life, the universe, and everything. Evan Bates was the first noted account of a tombstone inscribed with the alternative wording, “What doesn’t kill me makes me stronger,” with nearly seven million more headstones following in the next thirty years, as that dumb generation slowly died out.

The innate motivation in all humans to “leave their mark on the world” has been a pervasive topic among teens, young adults, and seniors since the beginning of storytelling, which has been the result of an almost mechanical evolutionary counterpart operating in parallel to the humans’ own natural biological advancements. The most significant difference between the two processes, however, is the rate at which they accelerated; or, in biological evolution’s case, decelerated over time. When the pool of potential cellular modification states in an unchallenging environment dwindled, the human race fully embraced technology to ensure their evolution as a race continued, and its exponential rate of acceleration returned the favor magnitudes-fold.

The original phrase, “What doesn’t kill us makes us stronger,” somehow tunneled its way forward through time to emerge in the product tagline of a revolutionary bioenhancement gel announced in 2101, aptly named just Goo, which absorbed foreign pathogens and would create antibodies from them in real-time. It wasn’t the human race’s first foray into incorporating hard biology science into Sapien pathology, but it was probably the most influential in social and political impact, opening up the floodgates from primitive vaccines to serum after serum of health, emotions, thoughts, and dreams.

And on each baby blue tube of Goo, emblazoned in a luminescent off-white, was the age-old idiom, “What doesn’t kill you makes you stronger”.

This locution pierced the veil of time, persevering generation after generation, manifesting in essence as an idea that truly juked its own death and continued to grow stronger, enhancing its influence with each contextual association it accumulated over the years, continuing to push its way into published texts, lectures, and conversations.

It wasn’t until a bleak Tuesday afternoon in June of 2321 did the meaning of the saying finally get to me, as I was hunched over a windowsill staring into the finite abyss of Earth, trivially occluded by a heavy, cold rain that had plagued the province for an allegedly unbearable short duration of time.

For as much purpose and patriocy as the human race strove to immortalize themselves in their own eyes and falsely legitimize the defect of death, I had never really thought about what it meant for my life until I found myself completely lost in thought, eyes glazed over, wondering, “What does that mean about those who are immortal?”